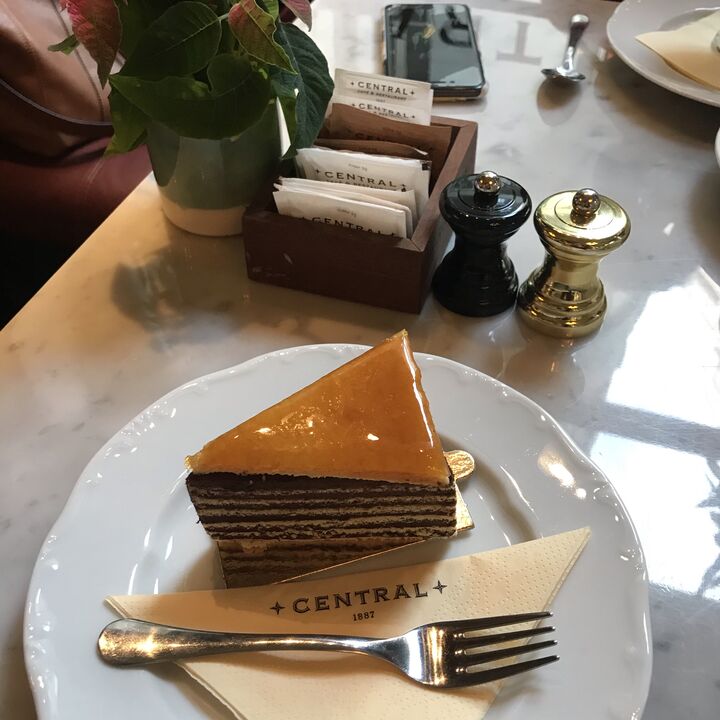 Bálint and I have been in Hungary for an extended weekend.

I read on a blog that Central cafe was really good and well known for the their desserts.

We woke up late and decided to head over there for brunch. We both had traditional Hungarian goulash soup. I think they did a really good job with the goulash, it turned out very similar to Bálint’s grandmother’s.

Afterwards, we had some dessert. I had the
Dobos cake, which is a favorite of Bálint’s mom. It is chocolate buttercream with caramel on top. It is a very traditional Hungarian cake. It was super yummy!

The cake looks tasty. What are the light layers made of? It looks like biscuits or wafers.

It is made from a sort of sponge cake. Bálint and I actually tried to make this cake for his mom fo her birthday, but we didn't make anything close to the slice of cake you see here lol. It is very difficult to make those thin layers of sponge cake. Im not entirely sure how they do it!

Maybe they use a filet knife or a meat slicer to get them that thin.

If I were to bake one of those (won't happen!), I probably would change the caramel for apricot marmalade or some mild jam.

The caramel part is actually a hard caramel topping. I had to take that layer off and use a knife to crack it to be able to eat it haha.

Several Hungarian cakes and pastries use sour cherry, apricot or plum marmalades, so if you ever go you will definitely find something like that! They also have many with poppy seeds and marmalades. I don't like the poppy seeds ones though. Bálint said that it is an acquired taste. He didn't like them when he was a kid, but now loves them.

No, no, I don't like poppy seeds. They taste terrible. I have never acquired them. 🙂

I think that a poppy seed muffin is fine since there isn’t very many, but the amount of poppy seeds they put in their sweets makes it too bitter for my liking! But maybe if I eat it often enough that will change 😆🤷🏻‍♀️